Health and Information – Playing online games when you are bored or at your leisure is very fun. However, did you know that online games can also have a negative effect on our physical and mental health?

In the latest version of ICD-11, WHO says that game addiction is disorders due to addictive behavior or a disorder caused by habit or addiction. Someone who prioritizes playing games rather than doing other positive activities is said to be a behavioral disorder.
Quoted from various sources, the following health effects are caused by playing too many online games:

One of the major health problems found in children and adolescents who play too much online video games is addiction. 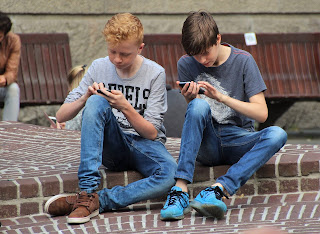 Many clinical trial studies show that the obsession arising from spending too much time playing online games is the same as alcohol or drug abuse.
The effects of addiction are manifested through a lack of focus on other daily activities, lack of attention in class, and constant thinking about games.
In fact, the World Health Organization (WHO) has established online gaming addiction as a type of mental disorder.
Game addiction can also appear accompanied by other mental disorders, such as stress, depression, and anxiety disorders.

Too much playing online games can also increase the risk of health problems in the eye organ, especially decreased vision.
The human eye does not have adequate protection from exposure to blue light, both from sunlight and electronic equipment.
Research from Harvard proves that blue light has long been identified as the most dangerous ray for the retina. 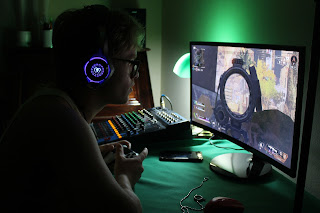 After penetrating the outside of the eye, blue light will reach the deepest part of the eye, the retina, and can cause long-term effects in the form of retinal damage.
In addition, excessive exposure to blue light can also cause an increased risk of macular degeneration, glaucoma, and degenerative retinal disease that causes blindness.

Playing too many games makes us lazy to move. The reason is, only the eyes and hands focus on working while playing games. While other body parts remain silent.
If this is done continuously, it will certainly have an effect on obesity. Game addicts also often adopt a bad diet. Of course, this will cause various health problems.

Quervain’s syndrome is a disorder caused by inflammation of the tendons. As a result, the thumb to the wrist hurt. This syndrome is caused by activities that focus on repetitive hand movements, one of which is playing video games.
The pain usually appears when holding or pinching something. The pain can get worse when we try to move the thumb or rotate the wrist. In some cases, the pain can spread to the whole arm.
So pay attention to our children when playing games too often, do not let our children become victims of game addiction.
Teach them positive things for those who can make them more creative in their future lives.